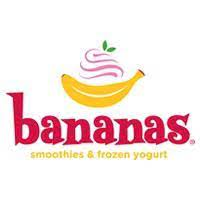 Villa Enterprises has 45 years of experience developing and operating restaurants, and now has more than 300 locations worldwide among its four brands. Villa Enterprises seeks franchisees for Bananas Smoothies & Frozen Yogurt and its other brands, and offers strong corporate support for the success of its franchisees, including its Villa University, a three-week training program at the company’s facility in all aspects of running a Villa Enterprises restaurant.

Bananas Smoothies & Yogurt was founded in 1979 as Everything Yogurt, and has since evolved into a national chain, with locations in California, Florida, Indiana, Maryland, Mississippi, New Jersey, New York, Ohio, Pennsylvania, Virginia, and Washington, D.C. Bananas’ parent company Villa Enterprises was founded in 1964 by Michele Scotto, when he opened Villa Pizza next to the Ed Sullivan Theater on Broadway in New York. From that store he expanded his company to more than 300 locations in 38 U.S. states and six other countries. Villa Enterprises also has acquired several upscale full- service restaurants, such as The Black Horse Inn & Pub.

Most Villa Enterprises franchises are located in high-traffic areas like airports, sports and entertainment venues, casinos, malls and universities. Entrepreneur Magazine named Villa Enterprises restaurants one of the top 500 Best Franchises in 2008.

Bananas Smoothies & Frozen Yogurt is listed in the Franchise Directory under the Food category. It's also listed in the section for Franchises Under $150,000.