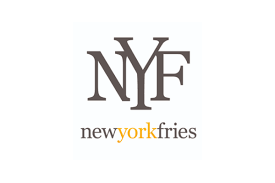 New York Fries is a Canadian fast casual restaurant, serving fries unlike any other, made from real, fresh russet Burbank potatoes, hand cut in the store throughout the day, leaving the potato skin on. The potatoes are then cooked in non-hydrogenated, Trans fat-free sunflower oil, which is also low in saturated fat and cholesterol free. The unique three-stage process is designed to seal in the flavor and nutrients of the potato and the results are crispy, lightly golden fries, the best around. Each cup of New York Fries is cooked right to order to ensure the best fries possible, hot and crisp on the outside, and fluffy like a baked potato on the inside. New York Fries come in a variety of flavors and types, including Classic, Braised Beef, Butter Chicken, The Works, and Veggie Works. New York Fries also serves delectable hot dogs, the perfect complement to their perfect fries.

New York Fries is a franchise that offers exceptionally high quality food options. For aggressive, passionate business people, it may be the ideal opportunity, and New York Fries gives franchisees the freedom to run their business the way they want, while providing the support necessary to ensure business success. New York Fries franchisees become part of an already established brand, so that they have a strong base of fan support to start with.

New York Fries was founded in 1983 by Jay Gould and his brother in Brantford, Ontario, Canada, after they read a New York Times article that said, ‘The best French fries are at a little stand at the South Street Seaport.’ The two brothers checked out the little stand and discovered New York Fries. They bought the company and the New York Fries story was launched. New York Fries now operates more than 201 locations across Canada, and in the United Arab Emirates, South Korea, Hong Kong, Bahrain and Iraq.

Ironically, since the original location of New York Fries, at South Street Seaport in New York City, closed, there have been no further New York Fries locations opened in New York, or in the United States.

Visit Us
https://www.recipefranchising.com/new-york-fries/
Connect With Us