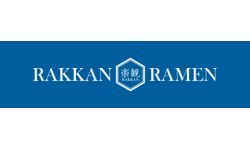 With 100% plant-based, traditional Japanese soup stock full of UMAMI, RAKKAN Ramen presents a new ramen experience. We generate UMAMI magic by slowly simmering vegetables and special seaweed to extract the best flavor. We’ll serve you a new and healthy alternative of ramen with soup, 100% free of meat or seafood.

With 100% plant-based, traditional Japanese soup stock full of UMAMI, RAKKAN Ramen presents a new ramen experience. We generate UMAMI magic by slowly simmering vegetables and special seaweed to extract the best flavor. We’ll serve you a new and healthy alternative of ramen with soup, 100% free of meat or seafood.

In June 6, 2011, we opened the first RAKKAN Ramen restaurant in Nishi-Azabu, Tokyo. Currently, we own and operate 4 outlets; all located in Tokyo.

We created an authentic Japanese Ramen with broth made of “Dashi”, a traditional Japanese soup stock full of umami, bringing out the best of each ingredient.

With a passion to let the world taste truly authentic Japanese ramen, I opened the first overseas outlet “RAKKAN | DTLA” in downtown Los Angeles in July 2017,

Within less than six months of starting our franchise business, we were able to get a total of 9 unit contracts in Atlanta, Chicago and Houston. (As of December 2019)

The popularity of Japanese food in the United States in the past ten years has continued to expand mainly in sushi. Ramen is expanding in the West and East Coast as the second largest after sushi, and its momentum is unlikely to subside.

In addition, now everyone knows that the market for vegetarians, including Vegan, is expanding worldwide. Even those who incorporate meat into their diets, are also eating vegetables a few times a day, for their own health.

However, people are not only looking for healthy food, but also for authentic and delicious food.

RAKKAN Ramen offers a unique and authentic food among many ramen.

While typical "Tonkotsu"(pork bone) ramen takes more than 10 hours to make soup, RAKKAN Ramen's 100% Plant-based broth can be made in an hour.

The tastes of many healthy foods are light and flat , but RAKKAN Ramen offers rich flavorful dishes.

It has a secret to the original seasonings (soy sauce, salt, miso) developed by RAKKAN.

Our simple operations to use them do not require experienced chefs.

Want to become a member of RAKKAN Ramen with unique and sustainable potential?

For more information, fill out the form and talk to our franchise development members!